A diary of meals and the wines that went with them.


On a recent trip to Tuscany, for Sunday, the 3rd June 2018, 11am, I had booked Catha & myself for a "Historical Vintages" tasting (i.e., old vintages of their Chianti Classico Riservas, private tour included, by pre-booked appointment only) at Badia a Coltibuono in Gaiole, Chianti. We were based in Montalcino at the time, so we had to get up a little earlier for the approximately 1&1/2 hours' winding drive northward. We made it in good time. 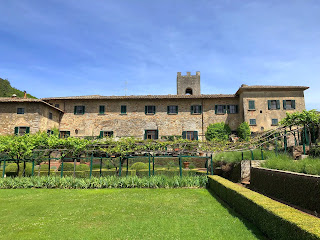 Originally built in the 11th century to be a monastery of the Vallombrosan Order of Benedictine monks, it was eventually bought in 1846 by wealthy Florentine banker Michele Giuntini. Passed down through the years to his descendants, now the Stucchi-Prinetti family (for lack of male Giuntini heirs at some point), one of whom, a lady, still lives there (but travels very often). I understand that she has a son; but he doesn't live there.

The estate's original Latin name was Badia a Cultus Boni, or, in English, "Abbey of Good Cult", alternatively, "Abbey of Good Agriculture/Harvest" - a testament to the fertility of its soil (the monks had to grow their own vegetables for sustenance after all). 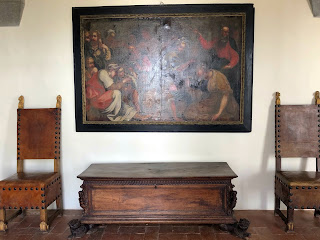 Restored 16th century paintings and furniture line the corridors. These are still in actual use - one can sit in the chairs. In other venues, these would be just for display, cordoned off from use. 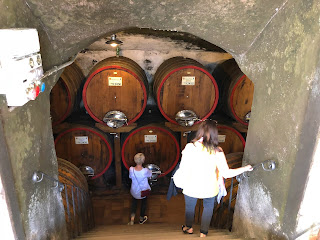 Down to the cellars where their wines are aged in varying sizes of oak barrels. The vineyards and modern winery themselves are 15 minutes' drive away; but the finished wines are brought to this estate for ageing. 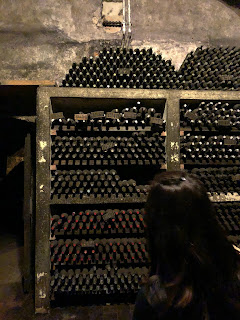 In this part of the cellar are kept the estate's old vintages. It is from here that the bottles for the "historical vintages" tasting are taken. The very oldest bottles, of course, are not made available for tastings; but are kept by the family for historical purposes. 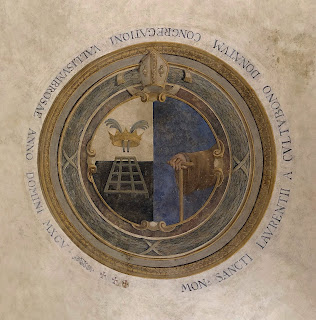 On the music lounge's ceiling is an old restored mural of the Vallombrosan order's symbol. The old abbey's original oratory was dedicated to San Lorenzo di Coltibuono who was martyred by being roasted alive over a grill - hence the grill with a crown. The hand on the right side holds a stick used for farming purposes, identified with the Vallombrosan order's founder, San Giovanni Gualberto. 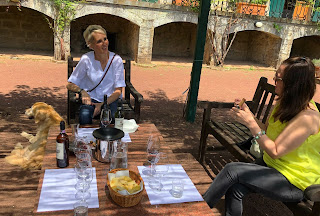 The tour done, we settled outside for the tasting. 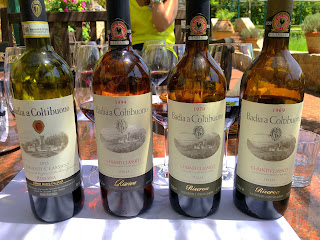 It wasn't one of those ubiquitous tastings during which one gets small pours of each wine. Four bottles of their Chianti Classico Riserva were open in our presence; and the bottles were ours to do as we wished. The older vintages that day were 1994, 1970 & 1969, with a current 2013 thrown in for comparative purposes.

The 1994's cork stuck stubbornly to the sides and would crumble in the middle when pulled; thus, necessitating straining into a decanter. Uncorking the 1970, 1969 and, of course, the 2013, presented no such problems.

The 1994 was the heftiest amongst the older wines, being a few notches over medium-bodied. It also came off as the most concentrated. I figured it would be the best for a meal. The 1970 was in notably good shape for a 48 year-old wine, presenting serene, contemplative soft fruit. The 1969 was comparatively the least in body, concentration, heft and ripeness, as we detected some greenness/stemminess, as well as drying tannins in the finish.

None of the older ones had particularly long finishes. Over-all, it appeared to me that the producer goes for a more old-school, classic, drier, acid balance lifted, elegant style as opposed to the richer, riper, lower acid modern style. 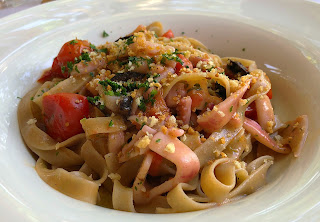 After the tasting session, Catha & I chatted with our guide (a very charming German lady who is married to an Italian) until a little before 2pm, then walked to the producer's nearby on-site restaurant for lunch; bringing along the rest of the older bottles (we left the remains of the 2013). Immediately above depicted is Catha's pasta course with squid, tomatoes, black olives and toasted breadcrumbs. 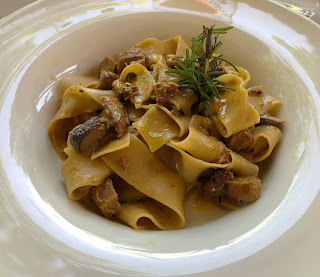 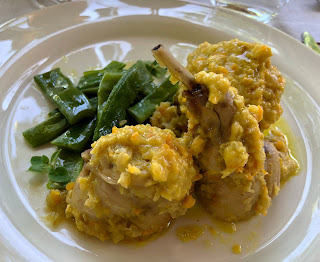 As we were to have dinner not too long from then, Catha didn't want a main course. Mine was the Braised Rabbit Leg en Fricassee. With it, I had mainly the 1994, and, thereafter, some of the 1970. The 1969 I poured a bit of to see if it would improve. It didn't. After a double espresso each, we drove back to Montalcino.

In all, the tasting and tour were quite enjoyable. The wines themselves were nice enough in varying degrees (well, except the 1969). I certainly wouldn't mind having their 1970 again; and am curious about their 1985, mid to late '90s and their 2001. We shall see.


On Thursday, the 7th June 2018, I was back for dinner at Cibrèo, this time, instead of their more formal ristorante, at their more casually chic caffè across the street (Caffè Cibrèo) because this is the only Cibrèo establishment that serves their (deservedly) highly recommended bistecca alla Fiorentina (melt-in-your-mouth, moist, served off the bone, with butter involved, etc.). It shares a kitchen with the ristorante, by the way.

Almost immediately after I was seated (with Catha, as Apple Lazaro-Villadolid and Bernadette Ofiana-Davis caught up after a few minutes), the ristorante's sommelier passed by, recognized me from the other night, and stopped to say "hello". We chatted briefly and I asked her what wine on the caffè's list would go best with the steak. She responded by saying that she'd bring me the ristorante's wine list from across the street. After a few minutes, list in hand, I glanced at it for a couple of minutes and said: "Please choose our red for us, and a starter white as well; after your great recommendation the other night (see: 2014 Fontodi Flaccianello della Pieve immediately below), I'm happy to go with whatever you decide." 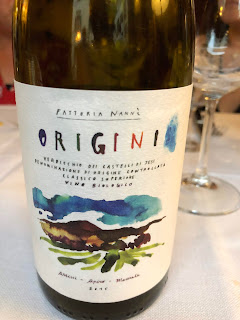 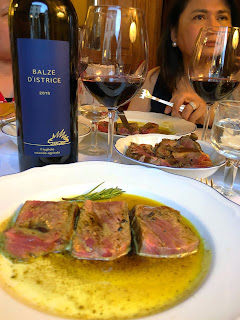 ...with the steak, we had the 2015 Il Tagliato Balze d'Istrice. This is a Tuscan IGT (80% sangiovese, 20% merlot, production typically only 1000 bottles per year) from producer-owned vineyard high in the hills of Greve in the Chianti Classico region. The producer's name, "Il Tagliato", means "The Blended"; and the bottling's name, "Balze d'Istrice", means "Cliff of the Porcupine" (hence, the drawing of the porcupine on the label). Big, full-bodied, notably/lushly ripe and generous. Rich dark red fruit, plum, cherry, cola, chocolate, vanilla (must see some new oak in the barrels), quite concentrated and dense; but, with decent freshness, adequate lift, it somehow, remains in balance. Comes off quite modern. That all said, it was more than a decent pairing for our indulgent steak main course.

If one somehow comes across this wine (may be tough if one is not in Florence or elsewhere nearby in the Tuscan region given the small production), it's definitely worth a try as it is moderately priced (around 65€ on the wine list). Well worth a go, in my book.

An Eye-Opener on Young Tuscan Red.


I normally shun young reds unless for academic tasting. For meals, I go for wines with at least a bit of maturity; but, a recent experience during a recent trip to Tuscany just might change that. During dinner at Ristorante Cibrèo (Florence) on Tuesday, the 5th June 2018, I asked the sommelier about two '95 IGTs on the wine list. She gave me information thereon, then recommended to go with my main course of...

...the very young (and materially less costly) 2014 Fontodi Flaccianello Della Pieve. I told her I prefer aged reds; but she gently urged me to try this out instead - saying she prefers aged reds herself; but that this is an exception. I decided to follow her advice, and I'm very glad I did.

I found it to be an irresistibly lovely young wine. After time in the glass, it opened up and presented clean, fresh, vibrant berries with notable purity and neat lines. Slightly over medium-bodied, nicely rounded/ripe tannins. Very smooth. A joy to drink. My wife loved it too. Excellent stuff. Days later, while wandering around the old part of San Gimignano, I happened across a wine shop with only one bottle of this for sale (moderately priced at 70€). Without hesitation, I bought it to bring back to Manila. Around 2 days later, back in Manila, I bought a couple of the 2013 vintage from Premium Wine Exchange. I've yet to try the 2013; but I plan to do so soon. I learned something new, and that's always good.